Even though I work in the games industry and I obviously love games, the novel is probably my favorite form of media. I’ve been reading a lot of books lately and I want to share some of my recent favorites. You’ll notice there’s a definite Stephen King trend; I’ve been trying to catch up on the ones I’ve missed. King is a master storyteller, and you should definitely check out anything from his enormous body of work. So anyway, here are some book recommendations from a music guy.
· 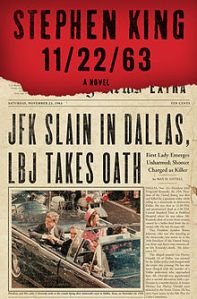 11/22/63 by Stephen King
This gigantic story about a man traveling back in time to stop the Kennedy assassination immediately became one of my all-time favorites. If you have any love for time travel stories or detailed examinations of past eras, this epic is for you. King brings his mastery of the personal story and utilizes it for something completely unlike any of his previous works. This is an adventure story, a thriller, a love story and a personal journey of finding one’s purpose in life. It has a few flaws, such as the Oswald scenes going on for too long, but the powerful immersion and meticulously researched detail make up for it, at least to me. Seriously, just read it, and you really will feel like you also traveled to the late 1950’s.
·
Pushing Ice by Alistair Reynolds
I love hard sci-fi, but I have a hard time reading the sci-fi classics, mostly because of three things that keep cropping up: rampant sexism or misogyny, military worship, or just plain bad writing or storytelling. These things show up again and again in the supposed classics of the genre and I find them too tiresome to bother with. Alistair Reynolds fixes all these problems by being an excellent storyteller who doesn’t hate women and doesn’t have a raging erection for military service. Anyway, Pushing Ice is a story about a 150-crew asteroid mining vessel that tries to chase down a mysterious planetoid moving rapidly through our solar system. Problems ensue and the vessel becomes isolated from Earth. This is where the real story starts. I expected a novel about exploring a giant alien artifact but instead got an interesting tale about the friendship and rivalry between two women and the decisions they have to make as leaders in the face of a truly frightening cosmos.
·
Bag of Bones by Stephen King
Here’s a quiet, introspective novel about a husband dealing with the sudden death of his wife. When he finally convinces himself to return to their summer home in a small town in Maine, two things happen: he gets inadvertently involved as a witness in a child custody case, and he discovers that his summer home is haunted. Many elements of the story are connected in surprising ways, and I believe I’ll need a second reading to catch them all. It tackles romance in a non-traditional way and actually has a lawyer character who’s likable. Bag of Bones is a refined, mature, but still classic Stephen King novel. 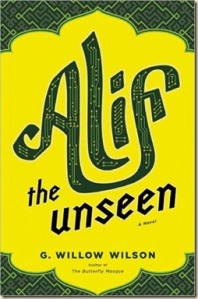 ·
Alif the Unseen by G. Willow Wilson
A young, jaded hacker living in an unnamed Middle Eastern country gets embroiled in state security and then genies start showing up. This modern fantasy has a pretty crazy premise but it almost never feels ridiculous or forced. Wilson very deliberately uses her story and characters to talk about issues of religion and boldly asks her questions regarding it without hiding behind coy metaphors. It’s a quick read and stays fairly intense without losing it’s sense of humor. The character arc for Alif, our protagonist, is well done and believable. I also love how it humorously stereotypes Americans.
·
1922, part of Full Dark, No Stars by Stephen King
This is a novella, about 100 pages, and is part of a collection of such stories by King. Most fans of King know that horror is not really the reason they read his books, but 1922 is one of the creepiest, most macabre tales I’ve read of his. A farmer in 1922 murders his wife over a dispute of ownership of their land and then has to deal with the consequences of that. The stress he experiences of having to cover up the murder feels palpable. We’re never quite sure if the things he describes are real or if he’s just losing his mind from the guilt and emotional strain. It’s dark, tense and absorbing. 1922 feels like classic Edgar Allen Poe, and that is probably the best praise I could give.