As you may know by now, I’m working on a standalone electronic album called Color Sky, made to be thoughtful, dreamlike and groovy. In the last post I talked about the inspirations for the album. This week I’m going to go in depth into Metro Molecule, and reveal a bit about my composition process. Here’s the track so you can follow along.

First of all, Metro Molecule is a deliberate attempt to emulate the style of Emancipator, or at least use his style as a starting point. This is what’s known as a pastiche. His album Safe in the Steep Cliffs is one of my favorite electronic albums of the last ten years. After writing a lot of low-key pieces for Color Sky, I thought something a bit more lively, like something out of steep cliffs would be a perfect compliment.

Emancipator is very loop-y, and by that I mean there are lot of repeating parts that may actually be just looped samples repeated over and over again. It’s not even really clear how much is authored directly by the artist and how much is made up of cleverly-used found samples. Regardless, he’s so good at what he does that nothing ever ends up sounding repetitive in a bad way.

I wanted to know how he pulls that off so well, so I sat down and analyzed one of his tracks. I listened to All Through the Night in 4 measure chunks over and over and over again, writing down every part I heard in detail. I gave each 4-measure block a unique name, based loosely on the intro-verse-chorus method of organizing pop music. You can see that analysis here, made in Skitch: 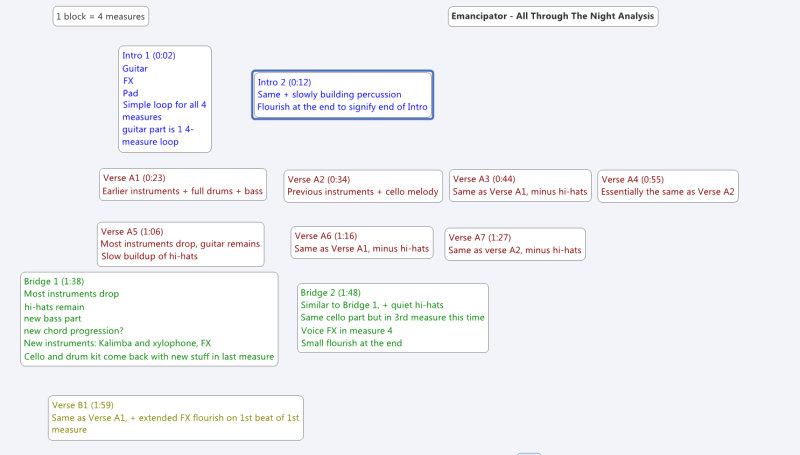 I write everything in almost full English. If I try to truncate it into some kind of shorthand, I will undoubtedly forget my original method and the next day I’ll have no idea what I wrote before.

I only got about halfway through the song, but I had enough to understand what he was doing. The artist maintains interest by swapping out different parts almost constantly. By writing a whole bunch of different, mostly interchangeable parts and then mixing and matching, he makes the loop-iness almost invisible. He also adheres pretty strongly to a nice pop-song-like structure. No individual part outstays its welcome. There’s a lot more subtle detail that I learned too, but I invite you to do your own analysis or simply follow along with mine. You’ll start to see subtleties for yourself.

I wanted an arpeggiated ‘hook’ to carry that chord progression. This hook would be the centerpiece around which I would compose just about everything else in the entire track. After a lot of playing around on the keyboard for an hour or so and fiddling with some notes here and there on Cubase‘s piano-roll editor, I came up with this little ditty:

After that I wrote lots of different accompaniment parts: multiple synth pads, a bass line, incidental melodies, and all the percussion. I knew I wanted a basic rock kit to be prominent, and Battery‘s Basic Kit is just about the least fancy percussion kit I’ve used in a while. It was perfect. There are some other little electronic bits and bongos as backup percussion as well.

Then it was a matter of arranging all these parts in that interchangeable way that Emancipator does it. For me, this requires some trial-and-error, plus simply ‘feeling out’ what sounds good. I wish I could expand on this more, but a lot of my melody and harmony writing comes from something approaching an intuitive sense, one I’ve built up from over a decade of experimentation. Try it yourself! Make a simple looped melody/chord progression and build as many parts around it as you can and then mix and match them.

From here on we’ll call the any part that has that chord progression we heard in the hook a ‘verse’ section.

Of course, I can’t just make an entire song out of one chord progression (or can I?), so I needed a bridge. This time, I actually wrote the simple bass line first, and then came up with chords to accompany it. The first note of that bass line at the bridge (1:17) has the same root (C) as the verse chords. This gives the bridge familiarity before it goes off in its own direction.

For the verse part I wrote the chords first and for the bridge I wrote the bass line first, without chords. There are lots of different ways to write music, and no one way is the most legitimate.

This process was mostly just me playing around until I had something that sounded cool, and then figuring out what the chords actually were later. Turns out it’s two measures of Cm7, pretty straightforward, followed by one measure of Cm11 no5 and then one measure of C aug5 sus4.

After the bridge we return to the verse (1:55), but now you’ll notice that the bass line and the hook part itself are being played by new instruments. We’ve taken out a lot of the background pads and added a light piano part. Notice how each of those alterations to the verse part change the way you perceive it. Without the background pads, for example, all the stuff in the foreground feels more immediate and arresting. Eventually I added a long-form melody that takes 8 measures to resolve (2:24). Adding something like this over the usual looping parts helps give your song a tremendous amount of life and staying power. Use it. 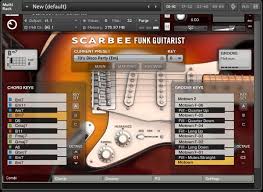 According to my brain, if you ever find yourself asking, “what would make this song better?” the answer is always funk guitar. I hadn’t planned to add funk guitar to this piece, but man I felt those drums were really asking for it. So I experimentally loaded up Scarbee Funk Guitarist and started messing with different patterns. I had something I liked pretty quickly and by then, of course, there was no going back (2:43).

At the end (3:21), I drop out most of the instruments and let it get ethereal for a while by using mainly background parts, then bring a new chord, D aug5 sus4, (3:41) for a bit to set up some tension to resolve with the last note. Using a suspended chord to set up tension and then resolving it with something else is pretty much Music Theory 101, and you can’t get much more basic than what I did there.

You’ve now followed me through the entire song.

You might have noticed that it sounds like I actually composed this piece by piece, from beginning to end as I was going, rather than composing it as a whole before producing it. This is exactly what I did and is, in fact, how I tend to compose a great portion of my work.

Even though I wrote is as I went, I still made sure the piece was made up of discrete sections (intro, verse, bridge, etc). A common issue I hear with amateur pieces is there’s no distinct separation between parts, which leads to a tiring, run-on sentence feel to the whole track. It will have the same level of intensity throughout. You need to have quiet parts and louder parts, and you need to have clear transitions between them. One way to help with transitions is to put a good flourish at the transition point. A good, basic example of this would be a buildup of sound followed by a cymbal crash. You can hear that a lot in Metro Molecule if you pay attention.

Screenshot of the entire project, click to see a larger version.

You definitely don’t have to write an entire piece from start to finish before getting into production. I write as I go all the time, and it makes the whole process feel like an archaeological dig: you never quite know what you’re going to find by the end. I certainly didn’t know there was going to be funk guitar when I started, for example. However, you must keep an eye on the big picture. Constantly ask yourself where the piece is going and what kind of part would best fit next. Continually go back and listen to the whole piece from the beginning. Sometimes it helps to write two or three chord progressions first and then fit them in as you go, so that you at least have something to put in when thinking about the larger structure of a piece.

Everything in Metro Molecule was composed by me. Every note was either performed on my keyboard, programmed into a piano-roll editor, or in the case of the funk guitar, pieced together with a unique composition tool.

There are lots of different ways to compose a piece, and maybe from this essay you’ll see that there’s really no ‘correct’ way to do it. Don’t let your fears (or your stuffy music education) get in the way. Make a chord progression, or make a melody, and then build on it.

I know there’s a lot of stuff I didn’t cover, but I didn’t want this article to be size of a small novel. If you have any questions though, or you think there’s something else I should cover in detail, bug me on twitter (@benprunty). Next week, even more Color Sky!