I figured everyone else is doing it, why not me? Some of these are obvious, but my hope is that you’ll discover something here you might not have otherwise checked out.

I think I put more hours into Titanfall than on anything else on this list. The last online shooter I really played was Quake 3, but I was surprised at how little adjustment I needed to fit in with this game. It is so delightfully complicated, with so many interlocking systems. The thrill of capturing a hardpoint, scrambling into my giant robot, rushing to the next one and somehow surviving never gets old. Just writing about it makes me want to go back and play more.

This one’s pretty obvious, eh? I’m absolutely terrible at card and strategy games; I tend to only win one in every six matches or so, but I still love the design. I find the 30-card deck to be much easier to parse than Magic’s 60. Let me reiterate this: it’s a strategy card game that’s actually fun for people who are terrible at strategy card games. Also, I haven’t spent a dime on it yet and the fun hasn’t stopped. These two things alone make Hearthstone game-of-the-year material. 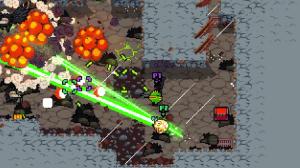 Nuclear Throne is perfect. There, I said it. It’s a hardcore roguelike shooter, polished to a shine, despite still being in early access. It’s the only thing that comes close to Titanfall in how much time I’ve spent with it. Even after all this time I’m still discovering new things, and I’ve yet to reach the Throne. Get some friends, pass the controller around, and see who can get the farthest. It’s seriously a great game with friends.

Dungeon of the Endless 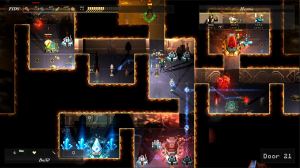 This funky roguelike/tower defense/strategy/rpg hybrid has great art and is impeccably designed. It also has some great music. I haven’t played the developer’s other games, but I’m told they’re known for their level of polish, and you can definitely see it here. The hybrid turn-based/realtime mechanics are weird, but they totally work in the context of the game. If you loved FTL, it’s very likely that you’ll get some enjoyment out of this one. 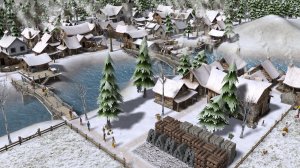 I really only like sim games that are smaller in scale. The epic 4X civilization games are often too abstract for me to wrap my head around, and I find them off-putting (you mean that one scouting party has been exploring the surrounding wilderness for 150 years?) So when small-scale village simulator Banished came out, I was incredibly excited. Building a functional community in the unforgiving wilderness is satisfying in the same way that building a functional park is in Roller Coaster Tycoon. Except Banished is way harder. Like stupid hard. You have been warned.

This is the second Vlambeer game on the list. Great visual style. That wonderful Vlambeer polish. A dynamic music system that’s tied to your airplane design. Just go play it.

Another obvious choice. A lot has been written about this already, so I won’t add much. The Lord of the Rings license was completely unnecessary; the procedural Orc characters and their hierarchies are the real stars of the show. I’m happy to see AAA games at least dipping their toes into the world of procedurally-generated content. I think it’s very likely that procedurally-generated content will be a big part of the future of big-budget games. We may look back on Shadow of Mordor and mark it as the beginning of a trend.

I’m a huge fan of designer/director Shinji Mikami. His masterpiece, Resident Evil 4, is a perfect game, in my opinion, and his lesser known games God Hand and Vanquish are huge favorites of mine. I was pretty underwhelmed with Evil Within’s first couple of chapters, but it didn’t take long after that for the game to hook me. The action is punchy and each area brings a unique challenge. There are just enough weapon and environment options for strategizing, but not so many that you feel like you can get away with anything. To me, this is the best kind of design for an action game. I figured the exaggerated Fangoria vibe would undermine the game’s horror vibe, but it’s actually still pretty creepy at times. The Mikami magic is still there.