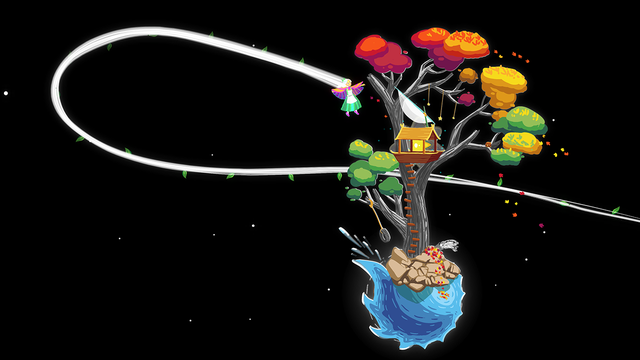 Gravity Ghost has been out a few months now, and the response to the game has been phenomenal. I’m stunned by the surprisingly poetic and emotional reviews. The game and its story resonate with people in a way that I didn’t anticipate. Because of this, what was originally going to be a simple analysis of musical motifs has become a bit deeper, exploring art and interpretation, which may give you insight as to how and why I write music.

Of course, many reviewers don’t mention the music. This is normal, but I still hope the soundtrack has contributed to the connection people have with the game. In this post I’ll talk about the major themes of the Gravity Ghost soundtrack and how they fit into the game. It might be good for you to pull up the soundtrack on Bandcamp (you can listen to the whole thing for free) and follow along.

The creative focal points of Gravity Ghost’s music were two strong melodic lines. They did not have names while I was working on the soundtrack, but each had a specific feeling and use. I’ll call one the Iona Theme and one the Ghost Theme. The nature of each, and calling them Iona and Ghost, help convey the two-sided nature of both the character Iona and the game itself. I’ll get more into that later.

I wrote this as part of Painted Stars, the very first Gravity Ghost track I made. This was way back in late 2010, when the game was little more than a basic prototype and Erin’s sketchbook, filled with drawings of Iona and forest animals. The melody is energetic, yet simple enough to be adapted to many different musical concepts. Here’s the melody as it appeared in Painted Stars. I’ve always liked that it begins on the second beat of its measure, though I couldn’t tell you now how that came about.

I think the melody itself hovers between dramatic and fun in a way that reflects the thrill of leaping through space. Even early in development, Iona’s jumping and flying animation exuded enthusiasm: her arms spread out, her hair blowing behind her. She’s showing an exuberance and confidence that you might expect from a girl who knows that she can no longer die.

Looking back, I think the Iona Theme, by itself, might be a touch too melancholy, (something that could be said for much of my music). However, it’s the accompaniment that truly gives a melody its character, and in this case I think the Iona Theme was always accompanied appropriately. It was both somber (Welcome to the Afterlife) and exciting (Running with Deer) when it needed to be.

The Iona Theme shows up in these tracks:

The Ghost Theme is deliberately melancholy. It’s ethereal and sad. I don’t think I’m really known for my subtlety, but this theme is one of the most subtle motifs I’ve ever written. Unlike most of my work, which I tend to write as I produce, it was written by itself, outside the context of a work-in-progress. It was just me sitting at my piano, trying to come up with interesting melodies for the game. I think this is the reason it works well even without accompaniment. One track, the people you abandoned, reflects this idea: it’s the melody played by itself with no other context.

Here I present two variations of the Ghost Theme, more or less how they sounded when I first came up with the theme on piano. There are only two notes that are different between the two variations, yet they give each one a distinct feel.

The Ghost Theme shows up in these tracks:

When I play the game, and see Iona’s family, I can’t shake the idea that they are the ghosts, fleeting images and sounds that haunt Iona’s current existence. This is why I chose to call it the Ghost Theme; despite the fact that Iona is clearly the character referred to in the title, it is her own memories and the world around her that have the true ghostly quality. This is, of course, only my own interpretation.

Thus, we come back to how the two themes represent the two sides of Iona, or even the two sides of the game itself. The Iona Theme was made to reflect the fun and excitement of hurling yourself through space, and may also reflect Iona’s enthusiasm for discovery. The Ghost Theme is more like the flashback story sequences peppered throughout the game: a small window into another world, and a tragic life, that we will never, as players, experience ourselves. It may also reflect Iona’s sadness and feelings about her former life, which is why the premier Ghost Theme track was named Memory. 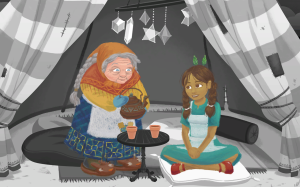 While it’s true that both the story and game changed a lot during development, as most creative works do, the themes of loss, afterlife, and family, and the sense of fun remained constant throughout the production. This is how music I wrote in the beginning of production still resonates with the final product.

To me, art exists only in the mind of the person taking it in. Following that concept, a single work can have multiple interpretations and they are all valid in their own way. I think it’s really cool that Erin and I inevitably have slightly different interpretations of the same story and world, yet we create a single work together. When a player downloads the game, the ‘art’ part is reset, in a way. It exists as a cloud of possibility, like an electron, waiting to be observed. The player then experiences the game and shapes their own distinct memory of it, now embedded in their own life, completely separate from our own. This is what makes art cool and interesting and worthy of discussion! It is how we can criticize a piece of art without invalidating it.

The Iona Theme and the Ghost Theme are not the only recurring motifs in Gravity Ghost’s music. There are more than a few others hidden throughout the soundtrack, waiting for players to combine them with their experience in the game, assembling a new memory. As Katherine Cross says in her review, “you don’t simply unravel Iona’s past, but also something of yourself as you soar in her trusting, safe night sky.”