As you probably know, I made the music for FTL, Gravity Ghost, Star Crawlers and a bunch of other games that are on their way. I am what you would call a successful indie; I get to write music full time and make a comfortable living doing what I do. I’m going to tell you a little about myself and the things I learned, because I think the information might be useful to an aspiring indie, musician or otherwise. First, a brief autobiographical account of how I got to be making music for games. Brace yourself, here comes

Confession time: I played trumpet in high school band, and I was so bad at it that the teacher actually had me stay back a year in band class. That’s right, I might be the only person on Earth considered too terrible for the high school band.

Around that time I discovered bad German trance music, loved it, and decided that making music with computers would be pretty cool. I saved up birthday and Christmas money to buy Sonic Foundry’s loop tool ACID from one of those giant, ugly computer catalogs you used to get in the mail. I ordered software from a paper catalog. The speed of technological change can make even a thirty-year-old feel ancient.

(Sidenote: we don’t have space to cover it here, but just assume that videogames were a huge part of my life as well, and served as a major inspiration. Making music for games seemed like the coolest job ever; turns out it is!) 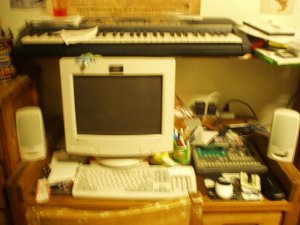 The “studio” in 2002, in my unbelievably messy college dorm room.

ACID was a fairly limited bit of music making software, but I didn’t know any better; I didn’t have internet access at the time and thus, didn’t know there were better digital audio workstations out there. I had a blast with ACID. I unearthed the family’s old 1980’s Casio keyboard and plugged it straight into our computer’s microphone jack and started recording clumsy little melodies over the loops.

I couldn’t afford to go to school for music, so instead I did what seemed like the next best thing: school for audio engineering. There I learned to record bands and sound effects, and spent my free time continuing to write near-unlistenable music using ACID and a cheap keyboard. Who has two thumbs and writes god-awful music for 6 years before it even occurs to him to study music theory on his own? THIS guy.

After graduating college by the skin of my teeth, much like I did in high school, I packed all my stuff into a minivan and drove from Maine (my home state) to California. People make games out in California, right? I figured the best way to get into the games industry was to be physically near it. Turns out I was right, but it would take a while.

Like many young people with few qualifications, I ended up working a number of different jobs, all completely different and all unrelated to games. This kept up for years, and the whole time I continued to make music at home. When I started to get better at it, I started telling everyone I knew that I wanted to make music for games. This segues nicely into the first big lesson that I tell every aspiring indie musician who asks:

Go out and meet people!

I can’t emphasize this enough. I spent a good 6 months sending out hundreds of personalized emails to every small game developer I could find, including samples of my work. I got zero jobs from this. Later I went to a local game jam and met Erin Robinson, creator of Gravity Ghost. I sat down with her at the jam and learned about her game, gave her a demo CD and said I’d love to do music for her project. About two weeks later I sent her an email asking if she’d listened to my demo CD. That is how I ended up on the project.

If you want to make music for games, or art for games, or programming for games, put on some decent clothes, get out of the house, and go meet people. Find out where game developers get together: meet ups, game jams, conventions, whatever, then go crash those parties. Be social, be friendly, and make sure everyone knows that you make music/art/whatever. Don’t be an obnoxious prick.

For some reason, very few successful people emphasize the importance of being a friendly, nice person. A game developer is far more likely to give a job to someone they’ve met and like over some faceless emailer. If you see yourself as an introvert or simply don’t like meeting people, well, now is a great time to get over that. If you live out in the middle of nowhere and you can’t physically meet game developers, now is a great time to consider moving. I know that can sound scary, but think hard about what you want from your life. There is no way I would have any of the jobs I have now if I had stayed in Maine.

Talent is a myth, so practice a lot

I don’t have a funny anecdote to go with this one, so I’m just going to slam it on the table like a big dead fish. Ready? We all carry a huge misconception: that all great artists have ‘talent’ or otherwise some sort of inborn ability to make great art that ‘the rest of us’ don’t have. Seriously, how many times have you heard people say, in a self-defeating way, “I just can’t draw,” or “I have no musical talent”? We’re going to decide together right now that ‘talent’ doesn’t exist. 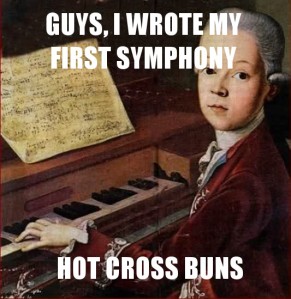 The famous story about Mozart composing his first piece when he was five fails to mention two key things: 1. Mozart had a dad who freaking loved music and cultivated his interest in it at an early age, and 2. that first piece probably sucked.

What was the significance of me telling you my life story earlier? Did you notice something missing? Something like, say, ‘musical prodigy’ or ‘prestigious music school’? I had zero musical talent, very little formal training, and I didn’t really get into music until I was much older than Mozart. My musical background is a mess. Yet here I am, talking to you about starting a career in music for games.

Do you see the point I’m trying to make? Screw talent. I don’t have it, and you don’t need it to succeed. What do we have instead? Lots and lots of practice. I have a gigantic catalog of old music I wrote going all the way back to around 2000. This mountain of old music is what I now stand on to reach good music. You absolutely need to build your own mountain. Start now. Make something every day. Here are some ideas for challenges:

1. Write ten 30-second long pieces, each in a different genre.
2. Write and produce a finished piece every week for 3 months.
3. Make a concept album.

Do anything! It doesn’t really matter what you write, as long as you’re challenging yourself and you’re doing it often. Send this stuff to people you trust and get feedback from them. Hell, send it to me and I’ll tell you what I think. (*UPDATE* – I get so many requests for music critiques now, and I simply do not have the time to keep up with them anymore. I am now rescinding this offer. Sorry!)

One last thing: a reexamination of luck

I was introduced to the FTL guys because my friend Anton knew Matt Davis, Subset Games’ programmer. Anton knew I made game music, and knew that Matt needed a musician for his game, so he introduced us. People will look at that situation and say I was incredibly lucky. This is true, and I thank fate daily for that incredible opportunity. But saying I was lucky is not very useful to you, the aspiring game musician. So let’s reexamine this situation:

1.  I wouldn’t have met Anton at a previous job if I had stayed in Maine.
2.  Anton wouldn’t have mentioned me to Matt if I hadn’t told him I made music, nor would he mention it if my music was terrible.
3. By the time FTL came along, I already had over 10 years of music-writing experience, and was able to put together a prospective demo in a couple days. The FTL guys loved it. That demo eventually became the title music.
4. I was working a part-time job specifically so that I would have the time to work on soundtracks.

My point is that while luck is a factor, that opportunity would have been useless to me if I wasn’t able to utilize it the moment it came my way. If you put in the effort, I can almost guarantee that some lucky opportunity will come your way eventually; you just need to be ready to grab it. When people say “make your own luck”, this is what they mean.

“It takes ten years to make an overnight success.”

I started making music in 2000, and my first real hit, FTL, came out in 2012. This should give you an idea of the amount of time and effort needed to succeed. Practice a lot, make smart decisions, be friendly and social and meet game developers. These are my secrets. Go forth with them.

Also check out the other articles I wrote, which tie into this one nicely: