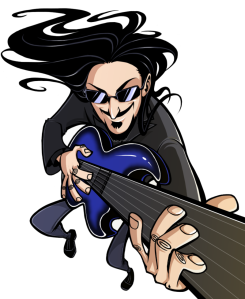 I absolutely love music rearrangement. OC Remix is one of my favorite sites and has been a huge influence on my own work. When a melody is strong enough, (or the arrangement artist is simply good enough) it can be used pretty much endlessly in different forms and contexts. After FTL came out, there have been a number of really cool rearrangements made by awesome artists, and I’m going to share them with you here. I honestly still can’t get over the fact that the soundtrack is popular enough to have this stuff happen.

All the artists here are incredible and deserve way more recognition than they’re getting, so I hope this can help a little.

Engi by Dren McDonald and The String Arcade

Dren McDonald is almost certainly a wizard. Through no collaboration with me, using only the finished track as reference, he made this incredibly inspiring arrangement of my favorite song on the soundtrack. This rearrangement is part of a whole album of video game string pieces, and 100% of the sales of the album go to the Alameda Music Project, a program to bring music education to underprivileged kids in Alameda, CA. Get it and support a good cause!

Mantis metal! Seems fairly appropriate. This guy even perfectly nails the bass slides. I also recently found out that he also did the goofy/awesome intro music for Jim Sterling’s Movie Defense Force.

Wow. Kennedy’s piano arrangement of the two fan-favorite tracks, Space Cruise and MilkyWay, adds so much depth to my simple chords and melodies. I especially like what he’s done with the title theme; makes me wish I’d done something similar!

I really don’t know how to describe how great this cover is. Little V turns Space Cruise into an inspiring, epic rock piece with such style and panache that I’m left speechless. I’m pretty sure he can also fly and disappear with dramatic flourish of his cape (which I’ve decided he must have.) I now have a severely unhealthy man-crush on the guy. Little V, where do I sign up to be a groupie?

Free Throws & Layups by some guy on the internet

Okay, this last one isn’t really a rearrangement. But damn, is it ever hilarious. Who would’ve thought these would work together so well? Be sure to listen to the whole thing.

Those are all the ones I know of so far. I’ll keep updating this page as more appear. Thanks to all you game rearrangement wizards for making such awesome stuff.

Now, if I could only get a hold of Smooth McGroove…