Last October I wrote about how I had a plan to eventually do a live performance, a kind of funk/electronic hybrid thing. So far I’ve put in 135 hours of guitar practice and bought and played around with the Electribe groovebox. I haven’t written an update in a while simply because there hasn’t been much to say. Practicing an instrument is a slow, often tedious process. Still, I have learned some things along the way.

30 minutes a day is not enough

Practicing for 30 minutes a day is only enough to keep you from getting worse. In order to be truly productive, you’ll need to practice an hour or more each day. The more, the better.

In addition to teaching me all sorts of advanced techniques with its lessons, Rocksmith has taught me a new appreciation for rock music and all its nuance.

Rocksmith’s difficulty scaling can feel tough, but it keeps you from ever getting complacent. As soon as I feel like I’ve nailed a part in a song, Rocksmith recognizes this and bumps up the complexity a bit, so I once again feel like a beginner learning a new part. This can be discouraging and frustrating: I spent all that time learning this part and now you’re ditching it and making me learn a new part? You gotta learn to get over this and embrace the continual challenge.

Here are some techniques I’ve learned that might help you through your learning process:

When I taught myself piano, I would often get into this trap where I would spend all my time and energy learning to play just one song perfectly. Rote memorization is a terrible way to learn to play an instrument, but it’s easy to do when you’re just teaching yourself. By switching between modes in Rocksmith you keep learning techniques, chords and movements in a way that makes you understand their function. You’ll see how everything fits together, you’ll be a better musician, and you’ll avoid the trap of simply resorting to rote memorization for satisfaction.

I’ll say it again: if you’re interested in playing guitar at all, you owe it to yourself to pick up Rocksmith. It is an incredible tool and deserves way more praise than it gets.

It’s been about 7 months since I started this plan, and having only 135 hours of practice means that I’m nowhere near ready for live performance. I’ll have weeks where I don’t want to play at all, and it’s extremely difficult to dedicate time to practicing. I’m inherently lazy, and guitar is difficult. This is not a good combination for me.

Still, I’m sticking with it. Since this is purely a side project, I’m not too discouraged. I’m keeping that end goal of playing funky music live in my head, the same way I kept the fantasy of being an electronic musician in my head when I was younger.

The Electribe is really fun, but it may not be what I ultimately use 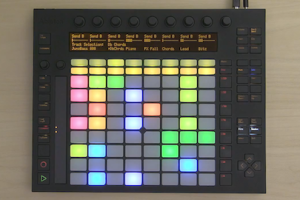 I got the Electribe in December, and I’ve played around with it quite a bit. It has a lot of features and it’s very intuitive to use. I’ve definitely lost myself for hours playing around with it. It does, however, have a lot of flaws that are simply inherent to a pure hardware device, like a limited palate of sounds and a clunky method of entering notes manually (I’m just too fond of piano-roll editors).

I wasn’t quite satisfied with it, but I might have been willing to work with it anyway if it weren’t for one pesky discovery: Ableton Live and Push.

I’ve never really paid much attention to Ableton Live before, but when I actually learned about how it works and how the Push controller integrates with it, I was nearly sold on the spot. It all works pretty much exactly how I would want a system like this to work. The fact that I can use the myriad of VSTs I already own with it is a huge bonus. The Electribe has some built-in functionality with Ableton, but experience has taught me that I’ll probably want to use Push instead.

I’ve been a studio musician for my whole career. When I got the Electribe, I simply did not realize how far we’ve come with live electronic music tools.

I haven’t purchased Live + Push yet (the standard package is about a thousand dollars), but I’m fairly certain I will get it eventually. As soon as I start using it, I’ll share my experiences with you on this blog.

Hopefully by the time I get to the next update I’ll actually have some music to share with you.